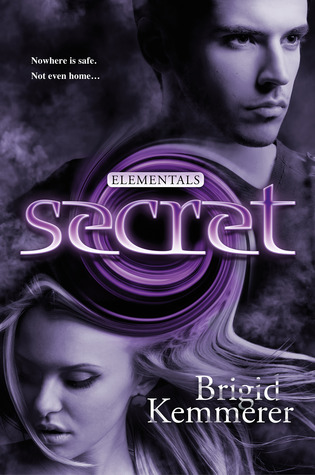 And then Quinn takes to hanging around his sworn enemy, and an Elemental Guide is counting the hours until he can try again to kill the Merrick brothers. Storms are brewing. On all sides.

SECRETS IN THE WIND. DANGER IN THE AIR.

Secret is my favorite book of the series and reached my top 5 favorite books of all time. I don’t know why there was no review of it in my blog. Time to change that.

Brigid Kemmerer uses third person POV and chapter by chapter she changes the main character, from Nick to Queen. That way we know what’s going on with both of them. I am not sure if the book would be better with first person POV but I am completely satisfied with the details and the description. Besides we have access to more characters and it makes it easier for us to follow the plot. We also get to read about the vaillains and it’s exciting when you know that both sides won’t expect what’s planned for them. I enjoy how Brigid Kemmerer focuses on feelings. I find it amazing when I can relate with the main characters and she succesfully made it happen. I also loved how she managed to turn a hateful character to someone who could be your best friend just by expressing his own feelings.

I am a huge fan of Brigid. She is so talented.

This book takes a small break from all the action and shouts out to all troubled teenagers.

Elementals still fight for their lives against the guides but being a teenager is not easy no matter how powerful you are.

So Nick has a secret and he’s afraid to tell his brothers or the world. It’s not that he is ashamed but he is scared of how they will react. Will they throw him out of the house? Will the beat him up? Will they simply accept him? Will they continue to love him the same? In my opinion he should have told them but I understand why he didn’t. Being the gay brother among 4 it’s not the easiest thing in the world. I seriously love how this book tries to send us a message against bullying and abuse.
Nick is probably the most loveable character I’ve ever read about. I would love to be his younger sister so that I could feel loved and protected. Yes, Nick was afraid of his brothers’ reaction but only because he cared and he loved them too much. What he didn’t know exactly was that they loved him back the same and maybe more. Especially his twin, Gabriel. Admiting the truth was not easy and because he was so scared, he turned into a person nobody thought he could be. He even physically hurt Adam. It’s ok to be scared and he’s only human and makes mistakes but it’s even better that he managed to find the strength to admit that he was at fault. Nick is such a strong character; physically because of his power and mentally as well. I love him so much.

Quinn also has some issues with her crack addict brother and her drunk mother. They both abuse her and yet she loves them. She refuses to ask for help because she is afraid of being sent away and her lack of self-esteem makes things worse. She feels like she has to “pay” for help and that’s not what friends do. Nick and Quinn try to keep each other’s secrets but when these secrets become complicated and too many to handle their friendship is tested.

Nick’s problems grow bigger when he meets Adam and when Quinn starts hanging out with his enemy, Tyler. But Tyler is not what he really seems to be and he helps Quinn. I actually got to like him even though I didn’t forgive the things he did in the past but I let it go. Tyler also has a secret and it’s a really messed up one; I was not expecting this.

When I read the first book, I was introduced to an imature, broken family with trust issues and too much hate. Now I am here with the same family, stronger than ever. All four brothers know the actual meaning of love and trust but sometimes they tend to forget. They know they need each other in order to live because that’s what family is for.

So this book and the series in general is all about family, friendship, love and survival. I fail to see a better combination that leads to greatness.