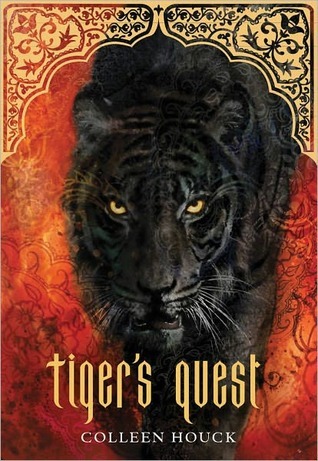 Back in Oregon, Kelsey tries to pick up the pieces of her life and push aside her feelings for Ren. Kelsey Hayes’s eighteenth summer was crazy. The kind of crazy nobody would ever believe.

Aside From battling immortal sea monkeys and trekking the jungles of India, she fell in love with Ren, a 300-year-old prince.

When danger suddenly forces Kelsey on another Indian quest, with Ren’s bad-boy brother, Kishan,the unlikely duo begins to question their true destiny. Ren’s life hangs in the balance–so does the truth within Kelsey’s heart.

Tiger’s Quest, the thrilling second volume in the Tiger’s Curse series, brings the trio one step closer to breaking the ancient prophecy that binds them.

[“One’s enemy is often the best teacher of tolerance.”]

Tiger’s quest has the right dose of adventure and romance a reader needs. And admit it, it’s a combination us hopeless romantic readers can’t resist!

I think Colleen Houck succeeded in wrtiting this book. There are many different types of scenes and I was satisfied with the way they were discribed. There were romantic scenes were we could easily relate with Kelsey because we were inside her head all the time. There were thoughts, feelings and great transition to dialogue. I also find amazing that even though it was a first person POV, the rest of the characters were described that way that the readers could also catch a glimpse of their feelings.

There were action scenes, detailed enough yet not tiring and that’s important because I can’t stand too much information. I mean yeah ok it’s good to know the surroundings of the characters but get to the point cause I don’t really care about the rest. I could easily picture what was happening in my mind and it was like I was experiencing the adventure with Kelsey.

Last but not least there were descriptions about scenery and India and small villages and I loved the way they were portraited. I feel like I have to visit India after reading the book.

I think the first third of the book was absolutely unessacery drama. There was no point in writing it at all. Kelsey was in love with Ren and Ren was in love with Kelsey, the end. The book would be awesome if it wasn’t for the first (tiring) third. I felt like I was reading a different book at first and then transformed back into Tiger’s Quest. The pace was so slow and I was struggling to keep reading. At the end I got the adventure I was looking for.

Because of my lack of knowledge about Indian History and world’s history in general, I can’t really tell if any of these stories and information is real. My guess is that they’re based in history and in facts and that makes the author well informed. It’s good that she studied and researched about what to write and how to connect her story with facts or to come up with new facts. My congratulations!

I am not even sure If I make sense but I love it when the world that the author builds has no flaws and when I want to know more about it and that’s how I feel about Tiger’s Quest.

I want to make it clear that I don’t like Kelsey. She is one of the most annoying character’s I’ve ever read about and the minus two stars in my rating is because of her.

She is the biggest drama queen ever, she is immature and even though she claims to be loyal, I think she’s not. She left the man she loved because she thought he was too good for her and that he would break her heart. Let me quote for you~

[“Why did you leave Ren?”
….
“First of all, he is gorgeous, and I am… not. He is also very wealthy. In fact, he comes from royalty. He is from a different culture and background, and he hasn’t dated much and-“]

Do you people realize as well how stupid this sounds? Am I the only one? Are these reasons to leave the person you care about the most? Apparently, she is too insecure and has trust issues.She doesn’t really deserve a man like Ren. Most people feel insecure but that doesn’t mean that they should just give up. Following that logic, I shouldn’t leave my house because I am always afraid of being hurt and I should break up with my boyfriend because I am afraid of loosing him. Are you for real?

And then there’s Kishan. If she loved Ren she wouldn’t have allowed anything to happen between them. That’s cheating and I do not approve. If someone tried to kiss me I would have slapped him and pushed him away on the spot because I know I love my boyfriend. Kelsey might love Ren, (I don’t really think so) but she’s looking for trouble.

So, I really don’t like Kelsey and her way of thinking and acting.

Ren is one of the most well written characters. Charming and sweet and he feels like royal. He can act his real age and he is so mature and gentle that I got chills everytime I was reading about him. He is sincere and his love is touching and deep and inspiring. He could be fair and he knew the right thing to say. if it wasn’t for Kishan I would have found my new book boyfriend.

Mentioning Kishan… he is my favorite! He is such a tragic character and he is so intruiging. It’s not his bad boy side that made me feel so many things about him but his kind nature. Yes, he made mistakes and yes he was jealous of his brother but I find his regret to be genuine and pure and real. Kishan seems more realistic because he has flaws in addition to Ren who’s the perfect prince. Kishan needs love and it’s tragic that all the girls he’s loved belonged to his brother. It’s not Kishan’s fault that he always comes second. He is living with the guilt and he is blaming himself and even though I understand, I wish he could get over of what he did. He deserves a great well written heroine and definitelly not Kelsey.

I really liked the book a lot and I’ve already started reading the next one. If it wasn’t for Kelsey, the book would have been in my top 5 favorites. Sadly I can’t get over the fact that she is annoying and that she caused all this trouble. It is true that if she wasn’t like that, the story wouldn’t turn out the same but I would have preferred a more important reason for her to leave Ren. Anyway… 3 stars for this book.

Buddy read the book with Raven [Dreamy Addicitons]. You can find her review [here].

New York Times Bestselling Author Colleen Houck is a lifelong reader whose literary interests include action, adventure, science fiction, and romance. Formerly a student at the University of Arizona, she worked as a nationally certified American Sign Language interpreter for seventeen years before switching careers to become an author. Colleen lives in Salem, Oregon, with her husband and a huge assortment of plush tigers.