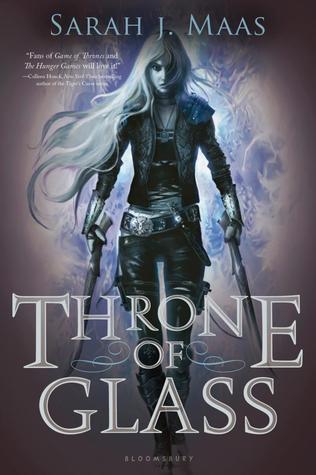 After serving out a year of hard labor in the salt mines of Endovier for her crimes, 18-year-old assassin Celaena Sardothien is dragged before the Crown Prince. Prince Dorian offers her her freedom on one condition: she must act as his champion in a competition to find a new royal assassin.

Her opponents are men-thieves and assassins and warriors from across the empire, each sponsored by a member of the king’s council. If she beats her opponents in a series of eliminations, she’ll serve the kingdom for three years and then be granted her freedom. Celaena finds her training sessions with the captain of the guard, Westfall, challenging and exhilirating. But she’s bored stiff by court life. Things get a little more interesting when the prince starts to show interest in her… but it’s the gruff Captain Westfall who seems to understand her best.

Then one of the other contestants turns up dead… quickly followed by another. Can Celaena figure out who the killer is before she becomes a victim? As the young assassin investigates, her search leads her to discover a greater destiny than she could possibly have imagined.

The past month, Throne of Glass was always in front of me in reviews, suggestions and even in tags. Bloggers were talking about it with excitement and I was so impressed. I decided to read it and I realized that it didn’t reach my own expectations. I found it hard to finish and I was ready to rate it with less than three stars but thankfully after reading more than half of the book, finally I got what I wanted.

Third Person POV is not my favorite but for some reason I think it matched the book. I don’t know how helpful first person POV would be in this case because there were multiple characters. Well to be honest the POV was changing anyway but the description was in third person. Either way, I enjoyed very much the details I got from the use of the POVs and I am glad we even the villain had his own part. So we had a full picture in every basic character’s mind and that was impressive because the focus didn’t change. I don’t how to explain it but even though there were multiple characters we had the time to get to know all of them enough. That’s actually impressive because it’s not easy to be able to make the readers relate to many characters at the same talent. It requires a lot of talent.

I wasn’t tired from the details, I could follow the story without any difficulty and I wasn’t confused at all. It was well, carefully written and neat. There was ballance among the dialogues, descriptions and feelings. Amazing!

This section caused me some trouble but I got over it. A huge part of the book, the first half actually, was absolutely boring. I didn’t find Calaena’s training and interactions interesting. She was trying to adjust from the life in Endovier to the life in Palace and for some reason I was hoping that she would cause some trouble but she didn’t and well… it was disappointing. Later when the murders finally started, my excitement grew and I was ready for the action that never came. Again disappointed. The book was all about what Calaena could do but didn’t do.

The best part was when finally Cain started acting weird and Nehemia appeared supsicious. Then there was the plotting against Calaena from people I won’t reveal now and of course the romance. I didn’t mind the triangle and I admit that it was thrilling, isntead!

In general the books look like a saga, a classical heroic tale and not just a simple series. So I won’t drop it and I’ll read more. Hopefully it gets better.

I am not sure I like Calaena. I find her all talk talk tallk and no action. According to everything I read, I was expecting a badass assasin who would cause trouble and everyone would be afraid of her. Well, that was not the case. Even though the start was absolutely terrific and Calaena seemed so awesome and left me in awe, when she reached the palace she acted like a spoiled, judgemental princess. She was talking about the things she would do and how acting like a princess offended her but she didn’t actually do anything to prove that she is what she said she was. Ok, yeah the tournament was somehow a proof that she was indeed awesome but I didn’t feel like she was. In the end I can only manage to think of her as the so-called assasin that showed no signs of being assasin.

Chaol was so freaking cool. He was actually perfect. I mean I found his behavior realistic and his actions had a point. He had to guard the supposedly assasin and he was suspcicious for a reason. He was careful around her and he was always on his guard. His warnings to Prince Dorian were correct since he had to do with a killer and no matter how girly she acted, Chaol was just always right. Yeah ok he trusted Calaena later and obviously fell in love but that didn’t ruin the picture for me. Also, he appears to be a great caring and loyal friend. I like him a lot.

Prince Dorian was pleasant. A bit annoying but still justified. He was a prince after all and he deserved to be spoiled at some point. To tell you all the truth I am team Dorian so far and I enjoyed so much his interactions with Calaena. I loved the way he acted around her and how he managed to approach her. I happen to love romantic dudes and I support that men can also be more sensitive when it comes to love. In general I liked the way Dorian’s mind worked and he also showed a couple of signs that he would be a great ruler and not a violent, rude king. I don’t know, maybe I will change my mind later but so far Dorian is close to the type of men I like.

I felt the need to also talk about Nehemia because she will probably be a huge part in the rest of the books and I wanted to simply state that I like her and that I didn’t doubt her at all. I just knew that she was the coolest princess ever and that in the scale of badass she is in the top and Calaena in the bottom.

The writing style and the last part of the book saved it from dnf-ing. Ok I’ll add Nehemia and Chaol as the saving team because they were worth of my time. I just had high expectations because of the fuss that’s happening and I was a bit disappointed.

I’ve read better books and I even though I feel somehow guilty for not liking it so much as the rest of you do, I am not sorry for my rating and my opinion. I am a weird, judgmental and mean person but please don’t hate me for that. That’s who I am.