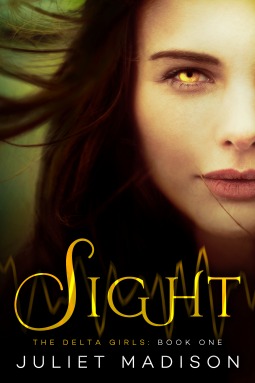 I spent my birthday fast asleep. In a coma to be exact.

When Savannah wakes up after two months in the hospital, she sees a whole lot more than expected, things that could put those close to her at risk.

The five Delcarta sisters have never believed in the paranormal, not like their woo-woo mother. Instead they believe in the power of sisterhood, of romance, and rebuilding their lives after their father’s mysterious disappearance nine years earlier. Starting anew in the small town of Iris Harbor, they see potential in all.

But Savannah’s awakening after having surgery on a life-threatening aneurysm brings a unique ability to the Delcarta sisters–together, each can predict the future with one of the five senses. And Savannah has the gift of sight.

A serial arsonist has been terrorizing the tight-knit community, and the Delcarta sisters have their suspicions on who could be to blame, including a boy who starts as an adversary to Savannah and then very quickly becomes her whole world. Investigating these crimes, trying to stop them before the next flame is sparked will call upon Savannah to use her newfound abilities with the help of her sisters, and will put each of their lives in danger.

This stunning new paranormal series blends the sweetest of romances with breathless suspense, and introduces five young women who share a haunted past, an extraordinary gift, and an uncertain future.

Arc kindly provided by the publisher, via netGalley, in exchange of an honest review.

The first thought I had when I started reading the book was that it was insanely smart and meticulous. There were some small but perfectly matched details that I enjoyed but I am not going to spoil them and ruin the fun. You guys have to read and find out. So because of that I gave the book one plus star. 4 it is.

Our female lead, Savannah, along with her 4 sisters find out that they have the power to ‘connect’ with each other and see glimpses of the future. Unfortunately they were too many sisters for me to keep track so I only focused on brave Savy who even after such a risky surgery she found the strength to live on. Having the love of her family as a foundation, she managed to build her life again.
So even though Savy falls in love and her romance is a big part of the book, I was actually relieved that for a change it wasn’t the biggest part. Thankfully Riley was not boring and predictable and he gave a special sparkle to the story.

When the fires start and the girls see the first important vision the real story actually begins. They try to discover the arsonist by predicting the fires. At that point I thought that the book couldn’t get any better and then BOOM, Savy can communicate with the dead. I swear that the scenes were so well written and I thought that if I lift my eyes from the book I would also see a ghost. I got scared and creeped out but that is not a bad thing actually.

I can’t say that there were plot twists and I think that I was able to predict the arsonist way too soon but it didn’t really spoil the book. Maybe it was too obvious just to me because I am super smart; what can I say?

The book was fun and easy to read. I wasn’t tired, confused or lost at all and I really enjoyed the happy end. It made up for all the creepy scenes!

Juliet Madison is a naturopath-turned-author with a background in dance, art, internet marketing, and perfume sales (yes, she was one of those annoying people in department stores who spray you with perfume). Nowadays she prefers to indulge her propensity for multiple careers by living vicariously through her characters. She likes to put those characters into extraordinary situations and take them on a challenging journey to discover their true passion and inner strength, weaving in some laughs, tears, romance, and sometimes a touch of magic along the way.
Living near the beach on the beautiful south coast of New South Wales, Australia, Juliet spends as much time as possible writing and coming up with new ideas, while doing her best to avoid housework.
Juliet is a proud member and volunteer with The Romance Writers of Australia and she loves to interact online with readers and writers via twitter (@Juliet_Madison), and facebook (www.facebook.com/JulietMadisonAuthor). She can be contacted through her website atwww.julietmadison.com where readers can also download some free short stories.