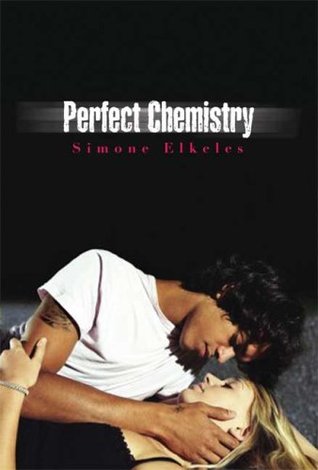 When Brittany Ellis walks into chemistry class on the first day of senior year, she has no clue that her carefully created ‘perfect’ life is about to unravel before her eyes. She’s forced to be lab partners with Alex Fuentes, a gang member from the other side of town, and he is about to threaten everything she’s worked so hard for: her flawless reputation, her relationship with her boyfriend, and the secret that her home life is anything but perfect.

Alex is a bad boy and he knows it. So when he makes a bet with his friends to lure Brittany into his life, he thinks nothing of it. But soon Alex realizes Brittany is a real person with real problems, and suddenly the bet he made in arrogance turns into something much more.

Ι’ll be honest! The book was like a fairytale to me and I expected something more real so that’s why I give only 3 stars.

I loved the plot and the characters, especially Alex. I loved how they both developed and of course that they helped each other in order to do so. If Brittany was not there, Alex would probably be dead and if Alex was not there, Britanny would still live in a lie. That’s what makes a book good and I assure you that it was.

The real reason why my rating is not higher is because I couldn’t relate at all. I mean this whole ‘high school perfect princess falls in love with the school’s bad boy/gangster’ is so fake to me. Why? I live in a very different country and that kind of stuff don’t really happen the same way. They do happen but not like that. Sure there are differences between poor and rich people but that’s just it. That kind of racism and descrimination almost doesn’t exist. We have different kind of racism but not to the point we get to be in gangs and kill people everyday. At least not most of the time. So because I’ve never experienced a life like that, feels like it’s too much, almost fake. I can’t get my brain to really believe that shit happens in America all the time but I know it’s true. I can’t explain it better. My lack of english doesn’t help.
Same goes for people like Darlene who need to be in spotlight. Why does it have to be someone who’s perfect and better than someone else? Why does it even have to be a queen or a king in the school? Why does it matter if there’s a prom queen? Why has a girl to prove herself by being a cheerleader? I seriously don’t get it.

Anyway, other than that the story was awesome and I loved how caring both characters were, not just with each other. I liked the fact that there were real, trustworthy friends and not just traitors. Their ‘love’ was still rushed but who am I to say that you can’t love someone in such a short amount of time? See that’s my problem with contemporary books. I can’t accept the fact that they say “I love you” so fast, especially kids in highschool but that’s another subject and I am not going to talk about it.
I was glad that Brit and Alex didn’t give up on each other and they actually learn how to fight for their wants and needs.

I don’t really know what else to write about this book. It was decent, easy to read and I enjoyed it.

Simone Elkeles is a New York Times and USA Today bestselling author of novels for teens. Simone’s books have won many awards including being YALSA Top Ten Quick Picks for Reluctant Young Adult Readers, being named to the YALSA Popular Paperbacks and Teens Top Ten lists, and added to the Illinois “Read for a Lifetime” Reading List. Simone also won the coveted RITA award from the Romance Writers of America for her book Perfect Chemistry. Simone is especially proud of the fact that the Illinois Association of Teachers of English named her Author of the Year.

Simone was born and raised in the suburbs of Chicago, where she still lives today. Simone went to the University of Illinois in Urbana-Champaign and received her Bachelor’s of Science there in Psychology in 1992. She continued her education at Loyola University-Chicago where she received her Master’s of Science degree in Industrial Relations while working for a manufacturing company creating diversity programs for their employees.

She loves animals (she has two dogs – a labradoodle and a German Shepherd), kids (she also has two of those) and her family. In her spare time she’s the Hockey Mom for her kids hockey teams and is an active Girl Scout leader specially trained in outdoor education. She also spends time mentoring other teen and adult authors. (She also loves sushi, which you can probably tell by reading her books.) Simone writes about teens because she was a teen in the 80’s (when spiked hair and blue eye shadow were “rad”) and she loves writing about those exciting teen relationships and romances.