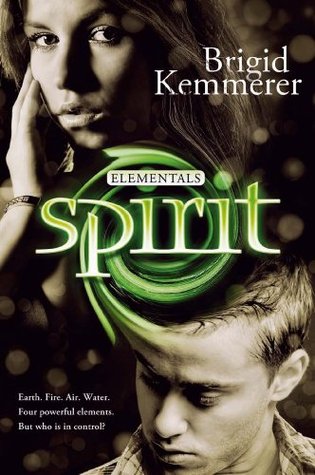 Hunter Garrity just wants to be left alone. He has learned the hard way that his unusual abilities come at a price. And he can’t seem to afford any allies.

He’s up to his neck in hostiles. His grandfather, spoiling for a fight. The Merrick brothers, who think he ratted them out. Calla, the scheming psycho who wants to use him as bait.

Then there’s Kate Sullivan, the new girl at school. She’s not hostile. She’s bold. Funny. Hot. But she’s got an agenda, too.

With supposedly secret powers rippling to the surface everywhere around him, Hunter knows something ugly is about to go down – which means he’ll have to find someone he can trust.

To be honest, as much as I love elemental series, I have to admit that this book was hard to read. It left me with mixed feelings, the same feelings that ‘Fearless’ left me with.
Brigid Kemmerer is amazing. Her writing style is fantastic and the way she gives dept to the characters makes them all so real.

Hunter was not the person we all thought he was. He was more damaged than Gabriel, who already had some serious issues. I could relate with Gabriel but I couldn’t do the same with Hunter who frustrated me to the point I had to take a break from the book. I admit that there were times I felt sorry for him and for all the bad things that were happening in his life. Three of the girls he tried to be in a relationship with, left him, betrayed him and died on him. It’s not just something you can simply handle or get over with. Also his father was murdered and his mother ignored the fact that his grandparents were being rude and mean to him. He felt betrayed, unloved and alone.
I can’t accept the fact that he couldn’t see how the Merricks were there for him. He refused to ask for help or even talk to them and that was what frustrated me the most. If only he could speak his heart things were going to be better for him.

Kate, the female lead of this book, was hard to understand as well in addition with Layne who actually made the story steady. She was raised and trained to believe that elementals were meant to be killed and when she fell in love with Hunter, because she really did, it was confusing and put her whole training and lifestyle at stake. I was actually glad that she was not simply guided to kill. She was strong, opinionated and curious but that was not enough for her.
I didn’t like her and I also didn’t like what was going on between her and Hunter. They were both in need of some love and they were both up for revenge so they were ready to use each other in order to take what they want. How wrong is that? Isn’t it pitiful that you can refuse love because of revenge when you know that revenge won’t bring back the dead?

To sum up, we had a story about two troubled teenagers with trusting issues and lack of communication. Somewhere near the end I was suffocating but I had to end the book. Hunter was a complicated character since the first book and he has to try hard in order to grow more on me. It was good to know more about him and I can finally see why he was behaving like that but that doesn’t mean anything.

So even though Brigid knows how to write an excellent book, this time it’s only three stars because of the characters. I know that it’s not fair but it was really hard for me to finish it because of all the drama and the betrayals.

Brigid Kemmerer finds the time to write somewhere between caring for her family and working at her day job, but sometimes she ends up mothering her coworkers and managing her family. The Elemental Series follows a family of four orphaned brothers who control the elements of Earth, Air, Fire, and Water, and their battles with those who want them dead.