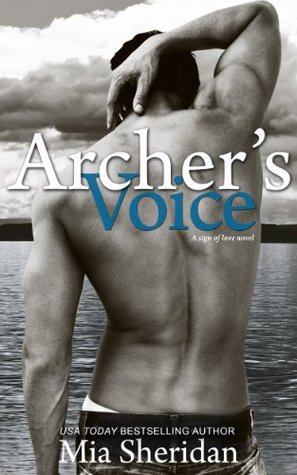 My god! I am so sleepy but I need to do this now before my feelings vanish. I actually believe that it is possible for two people to love so deeply to the point they would die for one another. I need to believe that love is what motivates humans to succeed. People shouldn’t be loveless and especially people like Archer who need it the most. This book should be an example of cruel, awful and selfish people can be and yet there is still humanity in them. At the end they all see but sometimes it’s too late.

Archer was a lucky man and got himself a woman like Bree. Bree was his knight in shinning armor and she was a fighter. She was through so much and though she was as damaged she fought for her life and went on. Well she had people who loved her and supported her but still it’s not something you just manage to do. Bree is amazing.

On the other hand, Archer was alone, completely alone and he couldn’t even speak. Easy? Absolutely not. It was a wonder he made it that far and survived even after being treated like an animal, maybe worse. What do you do when you’re being bullied your whole life? Unfortunatelly, there are kids that can’t handle it and kill themselves but in Archer’s case he just isolated himself and became a loner. When Bree came into his life and changed everything he got the courage to find himself not just because he wanted to live for himself but because he wanted to be worthy for Bree. She was his wake up call and I wish we could all have a Bree into our lives.
It wasn’t easy for them but they were a match made from heaven and they made each other a better person and that’s why love is the greatest gift someone can give. Love is a wonder.

The plot was amazing and even thought it was a bit predictable I didn’t even care. No, this time I just didn’t mind any flaw. The writting style was tiring but I finished the book in just a day because I ignored this as well. There were also some questioning parts like when Bree was holding Archer and still was able to sign to him and other silly things like that but yeah I am becoming bitchy again and I’ll just stop.

I was going to rate the book 3 stars if it wasn’t for both Archer’s and Bree’s well written characters! I loved them both and they deserve a star each! 5 stars from me it is.