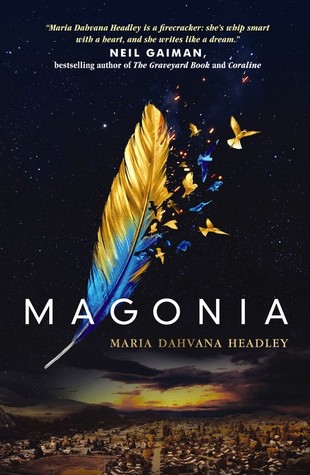 So much potential… wasted. This book could be the book of the year if it wasn’t so weird. The world building was amazing and the plot was unique and fresh.

The beginning was a bit depressing but I could handle it because it was about the other side of death. Aza was talking about how people don’t want to talk about death because it scares them.

[Death is the Santa Claus of the adult world. Except Santa Claus in reverse. The guys who takes all the presents away.]

I was shocked about how casually she was referring to death because it scares me as well but then I realized that if you’re sick and death is close then you probably have to come to terms with dying. Aza was brave and even if it was shocking she was right.

Also, I loved Jason and his relationship with Aza. I was touched everytime there was a chapter of Jason’s POV. How can a person be so sweet and loving? I seriously wish I had a friend like him, to be able to understand and see through me. He was trying so desperatelly to save her life and he didn’t give up on her even after she “died”. His grief was so realistic that had me crying.

We all hope for the best and even though we think we’re prepared for the worst, we’re not. It’s only human to have hopes that the worst scenario won’t happen. Jason felt so human to me.

Magonia was amazing with all these beautiful creatures and birds. I wish I would be able to see them. Ships and sails and pirates. It was incredible!

If it wasn’t fot the long, tiring sentences that I couldn’t follow and the weird dialogue style, I would have enjoyed the book. The sentences had the size of a paragraph, for example:

[Sleigh loaded down with memories and wineglasses and pots and pans and sweaters and grilled cheese sandwiches and Kleenexes and text messages and ugly houseplants and calico cat fur and half-used lipstick and laundry that never got done and and letters you went to the trouble of handwritting…..] this one goes on and on.

I was lost at the first line. Why use long unnecessary sentenses?

The dialogue sometimes had this formation:

Why? Why were the dialogues like that? It was like I was reading a movie script or a screenplay. I didn’t need that.

Also I was lost everytime she was using () or {[[[]]]} or (&&&). What are these weird marks and what exactly do they mean?? I thought at first that () means something like ‘love’ but I am not sure. If you’ve read the book and you’re smarter than me please explain them to me.

What does that even mean??

And also explain to me why there were all these pi digits. Yes, I know they meant something deeper and that they were keeping Jason sane and ready to try for the best but why the digits were in front of me all the time?

I don’t know. I wanted so bad to enjoy this book because I really really really liked the story but I was so tired after reading it and I was almost glad that it was over. Isn’t it such a pity?

Maria Dahvana Headley is the author of the upcoming young adult skyship novel MAGONIA from HarperCollins, the dark fantasy/alt-history novel QUEEN OF KINGS, the internationally bestselling memoir THE YEAR OF YES, and THE END OF THE SENTENCE, a novella co-written with Kat Howard, from Subterranean. With Neil Gaiman, she is the New York Times-bestselling co-editor of the monster anthology UNNATURAL CREATURES, benefitting 826DC.

Her Nebula and Shirley Jackson award-nominated short fiction has recently appeared on Tor.com, and in The Toast, Clarkesworld, Lightspeed, Nightmare, Apex, The Journal of Unlikely Entomology, Subterranean Online, Glitter & Mayhem and Jurassic London’s The Lowest Heaven and The Book of the Dead, and will soon appear in Uncanny, Shimmer, and more. It’s anthologized in the 2013 and 2014 editions of Rich Horton’s The Year’s Best Fantasy & Science Fiction, & Paula Guran’s 2013 The Year’s Best Dark Fantasy & Horror, in The Year’s Best Weird Volume 1, ed. Laird Barron, and in Wastelands, Vol 2, among others. She’s also a playwright and essayist.

She grew up in rural Idaho on a sled-dog ranch, spent part of her 20’s as a pirate negotiator and ship marketer in the maritime industry, and now lives in Brooklyn in an apartment shared with a seven-foot-long stuffed crocodile.