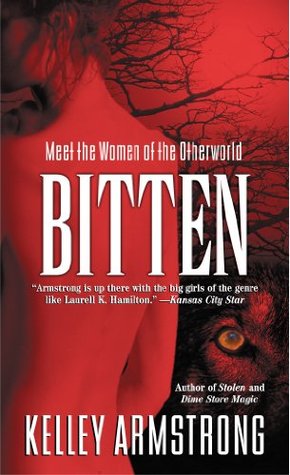 Elena Michaels is the world’s only female werewolf. And she’s tired of it. Tired of a life spent hiding and protecting, a life where her most important job is hunting down rogue werewolves. Tired of a world that not only accepts the worst in her–her temper, her violence–but requires it. Worst of all, she realizes she’s growing content with that life, with being that person.

So she left the Pack and returned to Toronto where she’s trying to live as a human. When the Pack leader calls asking for her help fighting a sudden uprising, she only agrees because she owes him. Once this is over, she’ll be squared with the Pack and free to live life as a human. Which is what she wants. Really.

Bitten was a good book. The plot was not as interesting as I was expecting but I was impressed by many things so I finished it.

Kelley Armstrong is quite talented and she satisfied my need to relate with the characters. For me it’s important to be able to experience the same feelings as the characters in order to understand them. She was blowing my mind everytime Elena was a wolf. The description of her feelings and senses and what was happening in her mind was fantastic. It was like I was Elena and I enjoyed it better than I should have. Of course the same was happening when she was in her human body. I loved that I could follow her thoughts and completely apprehend the reasons behind her actions and her behavior.

The only thing that bothered me was the transition from the actual story to Elena’s flashbacks and back again. One moment something was happening, and out of nowhere, we were years back and something else was going on. I was lost many times but I was able to connect the dots. After reading half of the book and after I got to know Armstrong’s writting style, I was able to follow without trouble.

As I mentioned at the beggining the plot was not as interesting as I was expecting. Maybe it’s because I am in a weird lovey dovey mood and I just needed something more fluffy and cheesy. Even though Elena’s love life was a huge topic of the book, the most thrilling parts were the action scenes; detailed enough and well built, they kept me on the ball. There was also a dose of creepy and sometimes I wished I hadn’t read certain parts of the action scenes.

Elena was an awesome badass and a great example of how female leads should be. Maybe I liked her so much because of her age and experiences and because of the fact that her way of thinking was closer to mine. I usually read YA books and most of the heroines are quite annoying and well… quite teenagers.
She was determined, focused and proffesional and even though she was trying to hide it, I could she her caring and loving side.

Clay on the other hand, besides the wildness and the temper he couldn’t really help, was a really adorable creature. He was all about love and affection and sometimes I just wanted to hold him and love him forever and ever. Yes, he seemed to be cool and untouchable but I could see behind his facade and I am telling you that the vibes he was sending me were different than what was expected.

I am not really into action and thriller books but I read it because a friend recommended it and gladly I was not disappointed. I’ll read some more because Kelley Armstrong is great in that kind of genre and I appreciate a good book from an author who knows how to do the job.