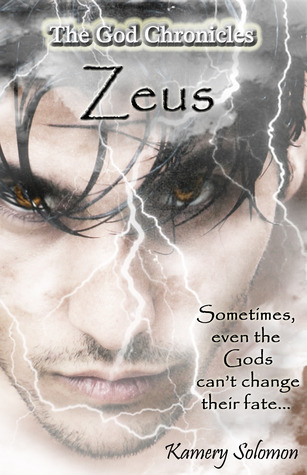 Vegas is not where Karly had imagined herself to be at this point in her life.She was supposed to be living in California, soaking up the sun and enjoying the life of an artist. Instead, she’s just moving out of her parent’s house and going to a school that could loosely be called her second choice. When she meets Zeus Drakos, owner of the new hit casino and resort in town, he seems just like every other jerk guy out there. How was she supposed to know who he really was?

This book was a disaster. I do hate leaving bad reviews but I can’t help it.

You know Zeus, the mighty king of Gods and all. In this book the fates actually banish Zeus from Olympus, they take his powers because he divorced Hera. Please! Nobody gets to banish Zeus from his home because all the other gods owe him and because if it wasn’t for him they wouldn’t exist. Zeus can cheat whenever he wants because he is freaking Zeus and nobody can stop him, not even Hera.
So I hated the fact that in this book Zeus was not Zeus but a classic creepy, rich, player with bitchy attitude. NO! God/Zeus can act that way because he is a god, but not human/Zeus.

About Karly; I hate her. She is the worst kind of female lead one can find in books. She is completely immature, she never listens to what others have to say and she is selfish, she comes to conclusions and creates unessecery drama and even though she is a college student she acts like a spoiled 15-years-old (no offense you’re not all bad, just the spoiled ones!).

Other than that it was not even well written. It was like all these fan fiction written by amateurs that I used to read. Not a good job at all..

It is really sad that I actually spent hours of my life reading it but I did it because I wanted to give it a chance. Maybe the plot would have been better, maybe I misjudged it but no.

Anyway if you have second thoughts about reading I suggest you don’t but that’s me. It is always nice to give books a chance because you never know. I mean we all have different tastes and opinions so you may actually enjoy it!